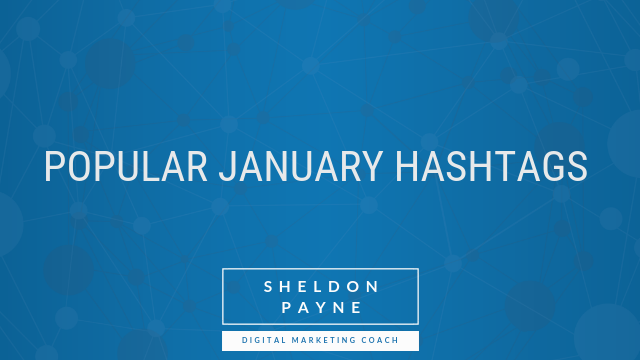 The following are a number of popular January hashtags. They had been put together to make the work of a social media manager easy to fill their social media calendar for your business or your clients.

This is the most recognized holiday all over the world. Moreover, it marks the beginning of a new Gregorian calendar year.

You’re encouraged to have a birthday toast for the author of The Lord of the Rings, J.R.R Tolkien, as part of JRR Tolkien Day on January 3. Why not also celebrate by reading or watching your favourite LOTR story!

Spaghetti is a type of pasta made in the shape of long thin strings. Today is recognized across the nation to celebrate it.

Technology has changed the face of the world and this day has been recognized to celebrate and share ideas relating to technology.

Stay warm during one of the coldest months of the year and cuddle up with a loved one, your pet, or just a warm blanket by the fire.

It is commonplace to hear about Thank God it is Friday, but this day is to celebrate the first Monday of the year.

There’s no better way to spend a cold winter’s day than relaxing in a warm bubble bath while celebrating this day.

This day is a day to show support and appreciation to law enforcement officers.

SAVE THE EAGLES DAY

The eagle is synonymous with America. However, the fact remains that many species of eagles are going into extinction. This day is to raise awareness of this.

National Cut Your Energy Costs Day encourages people to look for ways to reduce energy costs and save on their energy bills.

This day annually,  Curried chicken lovers all across the country celebrate this day with much gusto.

January 12, 2018, is National Pharmacist Day, a date set aside to honor and recognize the positive impact that pharmacists have in health care.

This day was founded in 2016 by the Tea Council of the U.S.A. Tea fans are asked to honour tea as a special beverage in their lives.

Today is a day dedicated to appreciating technology and how much it has improved our lives. The first public radio broadcast in history took place on January 13, 1910.

NATIONAL CLEAN OFF YOUR DESK DAY

This day is always celebrated on the second Monday of January. It is meant to honor an uncluttered, organized and clean workspace.

NATIONAL DRESS UP YOUR PET DAY

This day has been set apart to celebrate hats.

Proposed in 1972 by columnist Harold Pullman Coffin, this day was meant to be a day when Americans neither celebrate nor honor anything.

GET TO KNOW YOUR CUSTOMERS DAY

This holds every third Thursday of each quarter.  It is a day to reach out to customers in the quest to know them better.

Here’s an excuse to indulge in a better-than-average cup of coffee.

For some cheese connoisseurs the word LOVE just doesn’t accurately describe how they feel about cheese. Share the cheese love today!

A day to help raise awareness about the flightless birds whose numbers are dwindling every day.

There is only one way you are supposed to celebrate the holiday, offer a hug to anyone and everyone you want.

This day is a US Federal holiday in honor and celebration of Martin Luther King Jr.

If you’re a cat person, you’ll no doubt wonder what your cat is thinking from time to time. Now is your chance to find out and to answer some of the big questions.

COME IN FROM THE COLD DAY

Come in From the Cold Day is observed next on January 22nd, 2019. It observed annually in the United States.

According to the Writing Instrument Manufacturers Association, this day is a chance for all to re-explore the purity and power of handwriting.

This day, celebrated annually, is a call to everyone to compliment someone else.

National Opposite Day is a day to have fun all day long saying exactly the opposite of what you really mean.

This day is observed annually for recognizing and celebrating spouses.

This day is celebrated by people doing what they can to enjoy work.

Observed on Wednesday, January 30th, in the United States.

INSPIRE YOUR HEART WITH ART DAY

Find Me on Social Media

If you know of any other hashtags that I may have missed, please leave it in the comments or send me a message and I’ll get it added to the post.